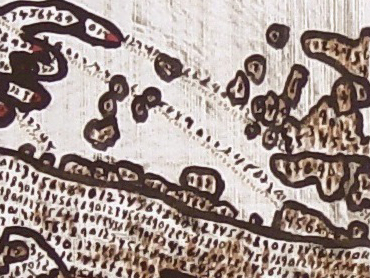 Yizhak Elyashiv: Paintings and Drawings and Joo Lee Kang: VictoriANimals run from March 3 through 25. A reception for the artists and the public will be held at the gallery on Friday, March 3 from 6 to 8 pm.

Elyashiv is a native of Israel who has lived and worked in Providence, Rhode Island since 1991. His best-known prints, which have been shown and collected by museums throughout the country, are records of physical activity in and out of the studio, “maps” of gestures and measurements undertaken in the landscape and on his printing plates.

The strictness and concision of mark that once used to characterize Elyashiv’s work is starting to untangle in this most recent grouping of work. Untitled 1 is a graphite drawing overlayed with white ink, the marks broken up as if stitched into the paper. The composition resembles wisps of grass growing out of the earth, the lyricism of the mark making in contrast to the subtle gray background.

On exhibition are two large maps that dominate the walls of the gallery. In Civil Unrest, a departure from Elyashiv’s earlier maps, the drypoint rendering is based on a mountain landscape in Israel. The overlapping imagery is a painted tangle of arms, hands, and legs reaching up from a mass at the bottom; within each form numbers suggest that the energy of the map is being controlled and contained. Elyashiv remarked about the origins of this piece, “This map came out of the Arab spring and the massacres in Aleppo. It’s more relevant than ever now in our current climate.”

Kang’s work appears as delicate, ornamental drawings presented in crisp white frames. If one looks more closely, however, the drawings reveal grotesque and mutated flora and fauna. Often presented as chandeliers or table arrangements one might see in the Victorian era, they teem with two-mouthed fish, three-footed birds, and hairless mammals. The line separating animals from plants has all but disappeared, some forms having been completely camouflaged. There’s a sense of foreboding inherent in these somewhat dark drawings, done with a red Bic ballpoint pen. At once delicate and subtle they are also intensely overwrought and obsessive.

Kang comments on her work, “By drawing mutated animals and plants, I question nature’s place in the modern context. What is nature? What is natural? The subjects I portray in my drawings reflect the ambiguity of the possible definitions. They show that I feel at a loss to describe what is natural in our present day. Cross-breeding, genetic engineering—the ways in which humans can control and reconfigure the natural process—become more abundant as technology advances. Should the results of such human developed processes be construed as a part of nature, or should nature exist independently of human progress?”

Joo Lee Kang was born in South Korea and educated in Boston, a 2011 graduate of the School of the Museum of Fine Arts/Tufts University program. She is the recipient of numerous awards, including the 2013 SMFA Traveling Fellowship, a St. Botolph Club Artist Grant, a Massachusetts Cultural Council Award in Drawing, and a Dana Pond Award in Painting. In 2014 she was the artist-in-residence at the Inside-Out Art Museum in Beijing, China and the Haslla Museum in South Korea.